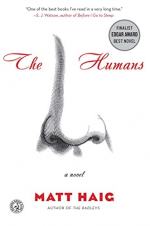 The Humans: A Novel Fun Activities

How would approach the narrator’s dilemma: become human and lost immortality, or kill two humans and remain immortal?

Write a sketch of a place you know well as if you were an alien from another planet.

If you were an editor with The Humans on your desk, what changes would you ask for?

The Humans — The Musical

Brainstorm bumper stickers that capture the meaning of the...

The Humans: A Novel from BookRags. (c)2021 BookRags, Inc. All rights reserved.