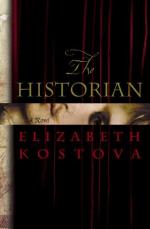 Elizabeth Kostova
This set of Lesson Plans consists of approximately 125 pages of tests, essay questions, lessons, and other teaching materials.

1. What happens to Helen at Rila Monastery?
(a) She is stabbed.
(b) She is bitten for the second time.
(c) She is shot.
(d) She is abducted by the grubby male librarian.

6. What was scheduled to happen only days after Elsie’s injury?
(a) Her college graduation.
(b) Her brother’s wedding.
(c) Her wedding to Hugh James.
(d) Her honeymoon with Hugh James.

7. Where does the letter about the Carpathian monk direct Helen and Paul to go?
(a) Istanbul.
(b) Transylvania.
(c) Crete.
(d) Bulgaria.

8. What role does Ranov have in the story?
(a) He is Helen and Paul’s guide in Bulgaria.
(b) He is chronicling the story of the narrator’s investigation into Dracula.
(c) He is Rossi’s former bodyguard.
(d) He is stalking Helen and Paul.

9. Whose life is the subject of the book Rossi tells Helen and Paul will help them kill Dracula?
(a) Saint Anne.
(b) Saint George.
(c) Saint Agatha.
(d) Saint Michael.

11. What does the narrator reveal about herself at the end of Part Two, Chapter 30?
(a) She knows where her mother is.
(b) She is pregnant.
(c) She has romantic feelings for Barley.
(d) She has met Dracula.

14. Where do Helen and Paul go to make a life for themselves after finding Dracula’s sarcophagus?
(a) France.
(b) America.
(c) England.
(d) Italy.

15. Where do Helen and Paul find Dracula’s sarcophagus?
(a) The dungeon.
(b) The catacombs.
(c) The library.
(d) The chapel.

1. Who was thought to be dead but turns up in Hungary?

2. Why does Rossi have to leave the village where his love is?

3. Why is Helen suspicious of Ranov?

4. What do Paul and Helen decide to do in Part Three, Chapter 62?

5. How was Rossi able to continue chronicling what occurred to him after Dracula abducted him?

More summaries and resources for teaching or studying The Historian.

The Historian from BookRags. (c)2022 BookRags, Inc. All rights reserved.