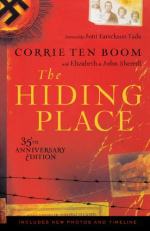 Create and record a radio broadcast of The Hiding Place. Students can play the different characters. Have students come up with different sound effects and music for the production as well.

Place a character's name on each person's back. Individuals have to ask questions of others in order to figure out which character they are.

Write a short story that is connected to the book. For example, you might write a story about a prisoner in one of the camps or an individual in hiding.

Letter from the Concentration Camp

Write a letter from the perspective of a prisoner in one of the concentration camps. The prisoner might be writing to another prisoner or to someone outside the camps.

Write a script for a play based on the book. Act out the play for an audience. Use either...