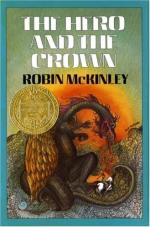 The Hero and the Crown Chapter Abstracts for Teachers

Robin McKinley
This set of Lesson Plans consists of approximately 109 pages of tests, essay questions, lessons, and other teaching materials.

• Aerin's mother was thought to have been a witch.

• Aerin is constantly bothered by her cousin, Galanna, who says that Aerin doesn't belong in the King's house, even though the King is Aerin's father.

• Because of the rumors about her mother, Aerin has always tried to prove herself.

• Therefore, Aerin decides to ask her father if she may accompany him when he goes west to settle trouble among the barons.

• Aerin asks in front of Perlith, Galann's husband, and he mocks her.

• Perlith's mockery doesn't bother Aerin as much as Arlbeth's refusal to take her with him.
• Aerin goes to her room and locks herself in, and she refuses to see anyone except Teka, her maid and old nursemaid.

• Aerin tries to get information about her mother from Teka.

• Supposedly, Aerin's mother died in childbirth disappointed that she had had a daughter.

The Hero and the Crown from BookRags. (c)2020 BookRags, Inc. All rights reserved.