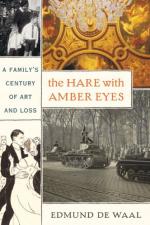 The Hare with Amber Eyes: A Family's Century of Art and Loss Test | Mid-Book Test - Hard

1. Who ordered the Ring to be be built?

2. Which of Charles' brothers was a playboy?

4. What pose does Charles hold in Manet's painting?

5. What was Dreyfus accused of?

1. What problems were Charles and his relative having at the end of Chapter 20?

2. How did Charles spend his time in Paris?

3. Why did Westerners view Japanese art as so different?

4. What was the family's goal in terms of their grain business?

5. How did Charles help Laforgue?

6. What did Drumont write about Jews in his anti-Semetic newspaper?

7. What was Sichel's view of Japan?

9. How did Charles live his life differently from his brothers?

10. What were Herr Wessel's teaching methods?

Why do the students think de Waal only shows the life of the rich Jews such as his family members in his book? In light of all the problems, what are the disadvantages with representing only the rich Jewish members of society? How would the meaning of the book changed if he had represented the lives of some of the poorer members of Jewish society?