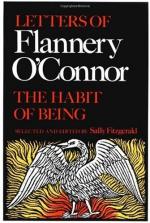 The Habit of Being: Letters Chapter Abstracts for Teachers

Flannery O'Connor
This set of Lesson Plans consists of approximately 119 pages of tests, essay questions, lessons, and other teaching materials.

Introduction, Editorial Note and The North

• Sally Fitzgerald, who was a friend of Flannery O'Connor's provides a brief summary of O'Connor's life.

• Fitzgerald describes the delight knowing that some of the letters in this book were written by Flannery as a young girl.

• The writings in the book contain knowledge and awareness of Flannery's development as a writer, a woman, and a thinker.

• Flannery O'Connor was born in Savannah, Georgia, on March 25, 1925.
• Flannery and her parents moved to her mother's birthplace in Milledgeville, Georgia, when Flannery was 12 years old.

• Flannery's father died when Flannery was 15-years-old and she remained in Milledgeville for her college education.

• Flannery graduated college in 1945 and continued on to a School for Writers at a university in Iowa.

• The editor points out that Flannery was a well-liked...

The Habit of Being: Letters from BookRags. (c)2020 BookRags, Inc. All rights reserved.