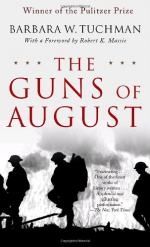 2. What did Kaiser William II say to M. Pichon of France at dinner that caused a fuss?
(a) That his French ancestry was a blight on his German pedigree.
(b) That the food was too cold for German palettes.
(c) That France would side with Germany in a war with England.
(d) That he did not appreciate the French. Not at all.

4. What instrument was played at King Edward VII’s funeral?
(a) Drums, bagpipes, and flutes.
(b) Horns, drums, and bagpipes.
(c) Drums and bagpipes.
(d) Horns and drums.

5. What did Sukhomlinov belive was superior to the bullet?
(a) The artillery.
(b) The cavalry.
(c) The tank.
(d) The bayonet.

1. What was the possibility of the appearance of the German Fleet in the English Channel in the beginning of Chapter 9 compared to?

2. How did Clausewitz claim one could win public opinion?

3. What did Foch say was the first condition of victory?

4. How many German trains were “each exquisitely scheduled to click over specified tracks at specified intervals of ten minutes” (79)

5. What was the one precaution the German commanders did not plan for?

1. What ultimatum did Germany send to Brussels?

2. What other country besides Germany planned to use the open frontier of Belgium as a route of invasion, however this time only after the Germans had violated Belgian neutrality? How did they plan to do this?

3. While the Germans had defeated the French in the Franco-Prussian war that ended in 1870, what condition was France in when World War I began just over 40 years later?

4. What color uniforms had the British and Germans changed to, and what country had not yet changed its uniforms before the war began?

5. Contrast Schlieffen’s bold plan of a right wing attack with his successor General von Moltke’s will to carry it out.

6. What was unique about the thoughts of the American Minister in Brussels about what the Belgian king’s 12-year-old son was thinking as he watched his father reject the German ultimatum?

7. In the beginning of Chapter 2 it is revealed that the alliances and counter-alliances of the various powers of Europe had created a “heap of swords piled as delicately as jackstraws” (18). How does this complex web of alliances help lead to the outbreak of war in 1914?

8. Contrast the differences between the Elder von Moltke’s view of the next war being a long war and the general opinion of the younger generation who thought the next war would not feasibly last very long at all.

9. Who controlled the area of Alsace when the war began, and who had controlled it before that?

10. How did Belgium, and King Albert, finally decide to respond to the ultimatum from Germany?

More summaries and resources for teaching or studying The Guns of August.

The Guns of August from BookRags. (c)2022 BookRags, Inc. All rights reserved.