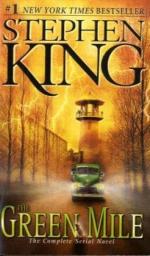 Stephen King
This set of Lesson Plans consists of approximately 101 pages of tests, essay questions, lessons, and other teaching materials.

Stephen King wrote The Green Mile. The aim of this lesson is to examine King’s life and writing.

Class discussion: What is King’s primary inspiration for writing about the macabre? What did King witness in his childhood that some speculate may have influenced his works? What book that belonged to King’s father influenced King? How? When did King begin writing? What was King’s first work? Why did he throw it in the trash? How did it get published? Under what pseudonym has King written? What genre are those stories? What other pseudonyms has he used? How did King’s accident with a car affect his writing? What is King’s formula for writing well? What is his daily quota of words that he must write? Why does King write? Who does King credit with influencing his writing?

More summaries and resources for teaching or studying The Green Mile.