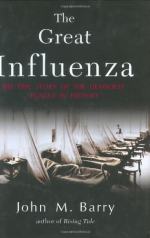 Related Topics
Rising Tide: The Great Mississippi Flood of 1927 and How it Changed America

1. The author states in Chapter 21 that the process of inflammation involves the release by certain white blood cells of proteins that are called what?
(a) Cytokines.
(b) Aminos.
(c) Hormones.
(d) Ionites.

8. Who was the dierector of the Public Health Service's Hygenic Laboratory in 1918?
(a) Louis Howe.
(b) Elias Canetti.
(c) George McCoy.
(d) Samuel Tilden.

12. What symptom of the 1918 flu refers to a bluish discoloration of the skin resulting from poor circulation or inadequate oxygenation of the blood?
(a) Regeneration.
(b) Ambiosis.
(c) Cyanosis.
(d) Passive immunity.

14. Camp Grant was located along what river?
(a) The Hudson River.
(b) The Trinity River.
(c) The Rock River.
(d) The Shasta River.

1. When did Paul Lewis complete his medical training at Penn?

2. Outside of what city was Camp Grant located, according to the author in Chapter 18?

3. Who is the great French physiologist who is quoted in Chapter 22 as saying "Science teaches us to doubt" (274)?

4. What sentence was socialist Eugene Debs given for opposing the war then the U.S. entered it?

5. How many sailors arrived from Boston at the Philadelphia Navy Yard on September 7, 1918?

More summaries and resources for teaching or studying The Great Influenza.