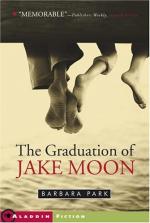 Barbara Park
This set of Lesson Plans consists of approximately 118 pages of tests, essay questions, lessons, and other teaching materials.

Pretend you are a newscaster. Make a report letting the public know what you observed when the old man was in the Dumpster and the three boys came along after school. Include an interview with the boys if desired.

Draw an image of a healthy brain. Draw another image of the brain of a person affected by Alzheimer's.

What's in a Name

Jake puts a great emphasis on the importance of a name. If you could choose a name for yourself, what would it be? Pair up with a classmate and make names for each other.

Thorbert drastically changed after Skelly began referring to him as the God of Thunder. Read some mythology to decide which god or goddess you would like to be named after. Explain why.

Sand Wood as Smooth as a Baby's BE-hind

The Graduation of Jake Moon from BookRags. (c)2021 BookRags, Inc. All rights reserved.