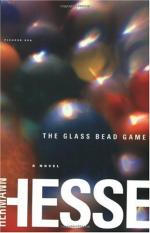 Hermann Hesse
This set of Lesson Plans consists of approximately 94 pages of tests, essay questions, lessons, and other teaching materials.

• Hesse says he has gathered everything he could about the details of Knecht's life.

• Hesse says he does not intend his book to be for people who play the Glass Bead Game, but for anyone who has an interest in the game. For this reason the book needs an introduction.
• Hesses says the introduction is neither a history of the game nor a rule book. The only way to learn the Glass Bead Game is through years of experience.

• The game draws upon the knowledge of many different disciples and is a way of playing with a totality of all culture's values.
• A player has the whole universe available to him, meaning that no two players experience the game in the same way.

• Hesse claims that the origins of the game can be found as far back as ancient Greece.

• Hesse looks at the intellectual life in...

More summaries and resources for teaching or studying The Glass Bead Game.