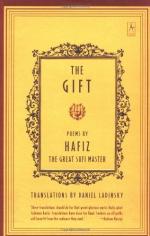 2. During his studies of Islamic law, theology, grammar, math, astrology, and calligraphy, Hafiz worked as a ______ assistant.
(a) Baker's.
(b) Calligrapher's.
(c) Butcher's.
(d) Blacksmith's.

3. Within his poetry, Hafiz tells the reader that he is speaking _______ truths mean to free people to celebrate and revel in the divine.
(a) Universal.
(b) Moral.
(c) Archaic.
(d) Selective.

4. The poem "A Hunting Party" makes the suggestion that the search for spiritual nourishment should take place ______.
(a) As a couple.
(b) As a family.
(c) Individually.
(d) In a community.

1. Hafiz grew up in simple surroundings as the son of a _______ who died when Hafiz was only a teenager.

2. Chapter 9 opens with the poem "The Prettiest ______" in which human beings are compared to dumb herding animals.

3. Life itself, rather than religion is described by Hafiz as the way to finding God in the poem "The _____ of Existence".

5. Hafiz was known to live in ______, and even now there are as many copies of his Divan as there are copies of the Quran.

1. In "I Rain," to what is Hafiz's poetry compared within the actions of nature and weather?

2. What does Hafiz encourage the reader to do in "Don't Die Again" according to this translation of Hafiz?

3. What does Hafiz reveal about himself in "Mismatched Newlyweds," according to this translation?

4. What is the symbolism which is being used in "Please," according to this translation of Hafiz?

5. What is the overall expression found in "A Strange Feather, " according to this translation of Hafiz?

6. In "The Sad Game," what is the imagery which is being used to describe the theft done by guilt?

7. What is the point of the poem, "Some Fill with Each Good Rain," according to this translation of Hafiz?

8. Why were Hafiz's poems destroyed by the fundamentalist Islamic leadership?

9. What does Hafiz send with the animals in order to spy on God in "The Ear that was Sold to a Fish"?

10. What is the purpose of Hafiz's desire to speak the universal truths in his poems, according to the translator?