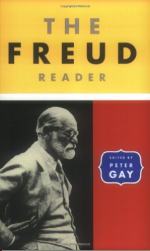 Sigmund Freud
This set of Lesson Plans consists of approximately 124 pages of tests, essay questions, lessons, and other teaching materials.

1. Briefly describe why Sigmund Freud is important to the field of psychology.

Freud is a major 20th century contributor to knowledge in the field of psychology and psychoanalysis. His theories help explain inner drive and behavior, as well as find their causes.

2. Explain what was paradoxical about Freud's attitude toward philosophy.

To some extent, Freud practiced philosophy, which makes his spoken hatred towards philosophy somewhat paradoxical. Psychology, like philosophy is sometimes based on ideas and not facts.

3. What is specifically difficult about the subject of psychology?

Psychology for the most part is an intangible subject. This makes it especially difficult to prove its results or findings.

Freud created an organization that prior to his death became an international one; before though, he used it as a platform to build and expand his ideas. It is still an active society.