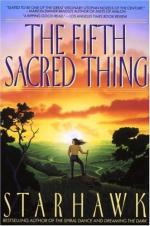 This character is ninety-eight and an elder of the City. Almost always in contact with the spirit world, Maya connects the past of the history of both her family and the City with the present. She is the grandmother of Bird and the elder of the House of Black Dragon.

A healer, this character's skills encompass not only traditional medical practices but also non-traditional herbal remedies and most significantly, powerful laying-on-of-hands whereby this character can spiritually diagnose and heal.

The novel commences with this character imprisoned in southern California. His memory of the ten years in prison and of his former life in the City are foggy, but as he begins to remember and reclaim his powers as a witch.

A traditionally-trained healer, this character practices medicine with Madrone. Although substantially younger than her, he expresses a romantic interest in Maya and the two...