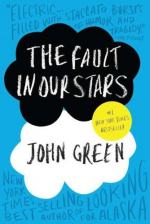 The Fault in Our Stars Test | Final Test - Easy

1. What does Peter Von Houten take out and begin drinking as Hazel’s parents give him a ride after the funeral in Chapter 22?
(a) Rum
(b) Whiskey
(c) Tequila
(d) Wine

2. What is the name of the tube that connects to Hazel’s oxygen tank and is inserted into her nostrils for breathing?
(a) Pinnacle
(b) Partition
(c) Cantone
(d) Cannula

4. What is described in the second section of the triangle from the top on “Maslow’s Hierarchy of Needs” in Chapter 13?
(a) “Esteem needs”
(b) “Security”
(c) “Physiological needs”
(d) “Self-actualizing needs”

5. What word from Chapter 14 means “rightfulness” or “legality”?
(a) Entropy
(b) Allegorical
(c) Adulterated
(d) Legitimacy

6. What museum does Augustus recommend Hazel visit in Chapter 13?
(a) The Rijksmuseum
(b) The Prado Museum
(c) The Van Gogh Museum
(d) The Guggenheim Museum

7. Who does the waiter say paid the bill for Hazel and Augustus’s dinner at the fancy restaurant in Chapter 11?
(a) Derek Wellington
(b) Mrs. Lancaster
(c) Peter Van Houten
(d) Lidewij Vliegenthart

8. Where does Augustus describe ten thousand corpses following the explosion of a volcano in Chapter 14?
(a) Pompeii
(b) Hawaii
(c) Jordan
(d) Alaska

9. What do Augustus and Hazel take with them when they visit the Funky Bones sculpture in Chapter 15?
(a) Augustus’s dog
(b) A guitar
(c) A bottle of champagne
(d) A picnic basket and fruit

10. What is described in the top portion of the triangle of “Maslow’s Hierarchy of Needs” in Chapter 13?
(a) “Esteem needs”
(b) “Self-actualizing needs”
(c) “Security”
(d) “Physiological needs”

11. When Isaac greets Augustus and asks how he is doing in Chapter 14, Augustus says that everything tastes like what?
(a) Cinnamon
(b) Roses
(c) Pot roast
(d) Pennies

12. What word from Chapter 20 means “unyielding” or “unalterable”?
(a) Inexorable
(b) Insinuated
(c) Tolerable
(d) Adulterated

14. Where do Hazel and her parents go on a picnic in Chapter 25?
(a) Holliday Park
(b) Northridge Park
(c) Central Park
(d) Golden Gate Park

1. Hazel says in Chapter 21, “When you go into the ER, one of the first things they ask you to do is” what?

2. How many marriages end in the year after a child’s death, according to Hazel in Chapter 23?

3. After telling Hazel about his recurrence of cancer in Chapter 13, Augustus claims that “The world is not” what?

4. What is the name of Amsterdam’s most famous park that is next to Hazel’s hotel in Chapter 11?

5. For how long does Hazel’s mother say she’s been hiding the fact that she’s taking online classes from Hazel in Chapter 24?