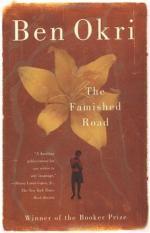 Ben Okri
This set of Lesson Plans consists of approximately 126 pages of tests, essay questions, lessons, and other teaching materials.

1. After awakening and giving his speech about power and responsibility, what does Azaro's father tell them not to kill but to command to leave?
(a) A lizard.
(b) Wild animals.
(c) Bad spirits.
(d) Unwelcome bugs and insects.

3. What animal's blood is poured on Azaro and kills his "guide", who is fighting the ferry woman at the great river?
(a) Wild boar's blood.
(b) Human blood.
(c) Chicken's blood.
(d) Lamb's blood.

4. What is the name of the boxer that disappears after Azaro's father defeats him near the swamp?
(a) White Tyger.
(b) The Green Leopard.
(c) Yellow Jaguar.
(d) Black Tyger.

7. Why does Azaro withdraw from his parents in the world of the living?
(a) To stop hearing voices.
(b) To stop seeing spirits.
(c) To punish them.
(d) To find relief from the pain.

10. Who fights with Azaro about sitting on the van and then they later become friends?
(a) The boy named Ade.
(b) The spirit girl from the bar.
(c) The landlord's son.
(d) The three-headed spirit.

11. Who does Azaro throw a stone at while coming home with the drink?
(a) Spirits.
(b) The foreman.
(c) The blind man.
(d) Other children.

13. What type of season is it in which Madame Koto grows more powerful?
(a) The Winter.
(b) The Summer.
(c) The rainy season.
(d) The Spring.

15. Whose tears from the world of the living flood houses in the valley during Azaro's spirit journey?
(a) His mother's.
(b) The women from the bar.
(c) His mother's friends.
(d) Madame Koto's.

1. Who shares Azaro's father's dream with him besides his son?

2. The rainy season ends and with that, who supposedly dreams of being chased by a lizard?

3. Who does not eat the food Azaro's mother puts out for this person?

4. How long does the money last that Azaro brings home from the woods for his family to use?

5. Who has a door widened to fit through when they walk?