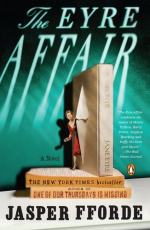 1. Why is Thursday at a different property when she regains consciousness after the fire at Thornfield Hall?
(a) Thornfield burned to the ground.
(b) Rochester wanted to be alone.
(c) Thursday had requested to stay somewhere else.
(d) Jane had returned to Thornfield.

8. Who is Thursday surprised to find in the town of Millcote?
(a) Asian tourists.
(b) A class of students.
(c) Uncle Mycroft.
(d) Charlotte Bronte.

11. How is Rochester blinded?
(a) By a falling beam.
(b) A burning ember flies into his eyes.
(c) He is shot by Acheron.
(d) His hand becomes infected.

13. What is Victor given to take into the meeting when he's undercover?
(a) A head covering.
(b) A gun.
(c) A note for another security guard.
(d) A catcher's mitt.

14. What does Rochester do for Mrs. Nakijima's guests while Jane is away from Thornfield?
(a) Readings of the story.
(b) Tours of Thornfield.
(c) Riding lessons.
(d) Interviews.

15. In Thursday's synopsis of Jane Eyre, how does the story end?
(a) Jane goes off to be a missionary with St. John Rivers.
(b) Jane declares her love for Rochester and proposes to him.
(c) Jane dies of tuberculosis.
(d) Jane returns to the orphanage to teach.

1. What manuscript does Acheron take to replace Martin Chuzzlewit?

2. What does Victor see people wearing at the meeting as they're milling around?

3. What is Mycroft allowed to do at the beginning of Chapter 24?

4. What does Mycroft do to protect Martin Chuzzlewit?

5. When will Thursday try to trap Acheron?

The Eyre Affair: A Novel from BookRags. (c)2022 BookRags, Inc. All rights reserved.