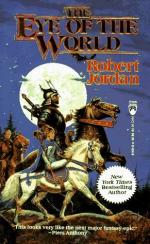 The Eye of the World Test | Mid-Book Test - Medium

3. What do the boys notice watching them when they have finished unloading the cider?
(a) A raven.
(b) A golden hawk.
(c) A falcon.
(d) An eagle.

4. How is Rand injured in his second dream about Ba'alzamon?
(a) He breaks his toe.
(b) He sprains his ankle.
(c) He pricks his finger.
(d) He slices his stomach.

1. Where does Moiraine sense the boys are after the attack outside the dead city?

2. How does Perrin cross the river after leaving the dead city?

4. Who offers to help Rand with his bad dreams?

5. What does Lan teach the boys to do on their journey?

1. Where does Elyas lead Perrin to avoid the ravens, and how does Perrin feel about this?

2. What does Moiraine say about the battle cry that Mat used when the Trollocs were attacking them?

3. What happens when Rand returns to the house to get supplies after the Trollock attack?

4. What does the innkeeper in Baerlorn tell Lan about when they get there?

5. What story does Raen tell Perrin after he eats dinner with Perrin and Elyas?

6. What does Morgaine tell the boys about Mordeth?

7. What does Mat do to the Whitecloaks in Baerlon?

8. Why does Moiraine decide to not search for Egwene after the attack in the dead city?

9. What wakes Rand from his dream about the Dark One and the long corridor?

10. What is the most important thing that Padan Fain brings to the Festival, and why?

The Eye of the World from BookRags. (c)2022 BookRags, Inc. All rights reserved.