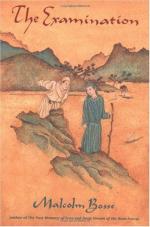 Malcolm Bosse
This set of Lesson Plans consists of approximately 140 pages of tests, essay questions, lessons, and other teaching materials.

He is a Chinese boy about fifteen years old who is living in a village in the Tianquan district of China in the sixteenth century.

He also called Two Brother, is the older brother of Lao Hong.

He is the father of Hong and Chen.

Hong and Chen's mother was an educated woman, which was rare in China at this time in history.

She is the daughter of a wealthy family in the home village of Hong and Chen.

He is a barber in Chengdu, indirectly introduced to Hong through his schoolmaster.

He is the examiner of the provincial exams in Chengdu.

He is a boy in the captive service of the pirates who take Hong and Chen hostage.

He is a high-ranking army officer who Hong seeks out to deliver a letter...