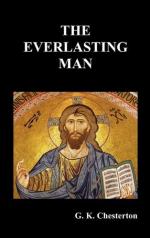 In the introduction, Chesterton describes a horse as it might seem to someone who had never seen a horse. Choose a common thing and describe what it might be like to see it for the first time.

In the introduction, Chesterton describes a story he imagines writing one day about a boy leaving home. Write Chesterton's story, making sure that the message he wanted to convey is clearly discernible in your own version.

Chesterton says philosophy and mythology (reason and religion) run like parallel rivers until they meet in Christendom. Illustrate this concept of the two rivers. Make sure in your illustration that the rivers as well as Christendom are identifiable. Be creative with your interpretation.

Illustrate the One God

Chesterton makes the point that in many pagan religions around the globe there is the concept of...