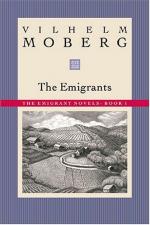 Vilhelm Moberg
This set of Lesson Plans consists of approximately 126 pages of tests, essay questions, lessons, and other teaching materials.

1. What is the premise of THE EMIGRANTS?

Karl Oskar inherits his land in 1844, the same year when King Oskar I ascends the throne of Sweden and Norway. With the property, Karl also inherits a debt worth three quarters of its value. He must work for as long as he lives to repay it. The book tells Karl's story of struggle and ultimate decision to take his family to America in search of a better life.

2. Who are the characters who comprise Karl Oskar's family?

His parents, Marta and Nils Jakob's son own a homestead called Korpamoen. Karl Oskar receives two royal names that are to assure him success while inheriting a long Nilsa nose that is to bring him luck. His father works hard all his life clearing their land from the rocks until one day he breaks his hipbone and becomes a cripple. He has one brother, Robert, and one sister, Lydia.

The Emigrants from BookRags. (c)2020 BookRags, Inc. All rights reserved.