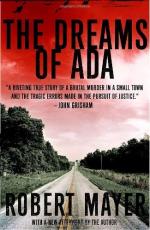 The Dreams of Ada Chapter Abstracts for Teachers

Bob Mayer
This set of Lesson Plans consists of approximately 125 pages of tests, essay questions, lessons, and other teaching materials.

• Chapter 1 introduces the case around which the entire book revolves; Denice Haraway disappears from a convenience store.
• The day after Denice Haraway is declared missing, police interview people in the area and find out from three witnesses that Denice walked out of the store with a man.

Chapter 2, Of Deer and Calves

• Composite sketches are drawn based on the descriptions of the two men who were seen at another convenience store not far from where Denice Haraway went missing.
• Police begin receiving phone calls from the local public saying that the composite sketches are of Tommy Ward and Billy Charley.

• Jeff Miller informs Ada police that on April 28, 1984, Tommy Ward and Karl Fontenot attended a party where they left to get more beer and returned to the party several hours later.
• Tommy Ward voluntarily goes to speak with Detective Smith and Baskin where he...