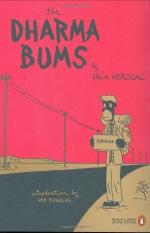 Jack Kerouac
This set of Lesson Plans consists of approximately 105 pages of tests, essay questions, lessons, and other teaching materials.

1. Where does Ray go when he is accused of drinking too much?
(a) Alvah's house
(b) Fisherman's Wharf
(c) Golden Gate Bridge
(d) Pier 39

3. Who does Ray dream of as Japhy and Ray sleep after their hike?
(a) Japhy
(b) Princess
(c) Cody
(d) Allen

4. What do Ray and Japhy decide to do when they become bored of the party?
(a) Walk to San Francisco
(b) Meditate
(c) Go for a hike
(d) Experiment with drugs

5. What does Ray tell Japhy he wants more than anything else in the world at one particular moment?
(a) A Hershey bar
(b) A glass of wine
(c) A Coke
(d) A joint

1. How many days has Ray been up at Desolation Peak?

2. About what mountains does Japhy begin to tell Ray stories?

3. What does Ray refuse to give into, despite the temptation?

4. What is the first name of Japhy's sister who comes to visit?

5. For how long does Ray continue to meditate in the woods?

1. What does Ray realize about himself once he arrives at his summer job?

2. What does Ray realize during one of his meditations he is empowered to do?

3. How does Ray get from Los Angeles to San Francisco as he searches for Japhy's shack?

4. What does Japhy's father do when he arrives at the party for Japhy's going away?

5. What does Ray refuse to do at a wild party at Sean and Christine's house?

6. What does Ray's brother-in-law think about his time in the woods and in the house?

7. What does Rheinhold Cacoethes do during the going away party for Japhy?

8. What is the vision Ray has in the fog while at Desolation Peak?

9. Where is Ray's future job during the summer months?

10. How does Ray get from El Paso to Los Angeles?