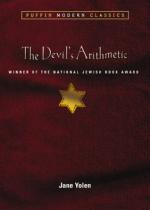 Jane Yolen
This set of Lesson Plans consists of approximately 113 pages of tests, essay questions, lessons, and other teaching materials.

1. What holiday does Hannah celebrate at the beginning of the novel?

At the beginning of the novel, Hannah is at her home in New Rochelle, New York. She is Jewish and will be going to her grandparents house for Passover. Hannah does not want to go to her grandparents for the first Seder, a ritual feast of Passover, because she feels it will be boring.

2. Who is lost in the Holocaust from Hannah's family?

3. What is Aaron's role in the ceremony of Seder?

While at the first celebration of Passover, which is Seder, Aaron is in charge of reading from the Haggadah. The Haggadah is a religious text, which Aaron must first read in Hebrew and then translated into English. Aaron is worried about his job of reciting from the Haggadah and complains he does not feel well due to his worry.