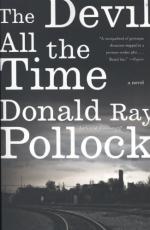 The Devil All the Time Test | Mid-Book Test - Easy

1. How does Arvin think he is viewed by others in the area?
(a) As a brilliant student.
(b) As an outsider.
(c) As arrogant.
(d) As a kind floormat.

2. What does Willard explain to his son about Willard's actions?
(a) He is cheating a scoundrel who deserves it.
(b) He wants to increase the cow herd so Willard has some inheritance.
(c) It is sometimes necessary to choose the time and place to fight back.
(d) His mother wants to go to her niece's wedding looking nicely.

3. How is Charlotte's funeral described?
(a) As highly attended.
(b) As sparsely attended.
(c) As lavishly done.
(d) Willard does not have a funeral.

5. At what does Dunlap hint to Willard one day?
(a) That Dunlap could pay for a good doctor for Charlotte.
(b) That he is going to evict Willard.
(c) That Dunlap could take Arvin on as an apprentice for a price.
(d) That Willard might be able to earn the house free and clear.

6. Where has Sandy been driving?
(a) Across the Midwest.
(b) In the New England States.
(c) In the Pacific Northwest.
(d) Across the South.

7. How does Arvin respond to Willard's action?
(a) He agrees with his father.
(b) He was relieved that they did not have to read the Bible every night.
(c) He is now aware of what happened to the lawyer.
(d) He is deeply disturbed.

12. What do Willard and Arvin do for hours each day?
(a) Work on remodeling the house.
(b) Sit and talk with Charlotte.
(c) Pray.
(d) Work on doing little things for Charlotte.

14. What does Arvin expect of his father after hearing the statement about Charlotte?
(a) To ignore the statement.
(b) To respond in some way.
(c) To congratulate the speaker.
(d) To go to town after Charlotte immediately.

15. What does Willard nail to a cross in the prayer clearing?
(a) Jack's carcass.
(b) The lawyer's rotting skeleton.
(c) The miscarried baby Charlotte had the year before.
(d) The pages from a Bible.

1. What is the result of how others in the area see Arvin?

2. Where does Willard later take Arvin?

3. About what do some of Dunlap's friends warn him?

4. How old is Arvin when Willard decides to move?

5. About what is Sandy confused?

The Devil All the Time from BookRags. (c)2022 BookRags, Inc. All rights reserved.