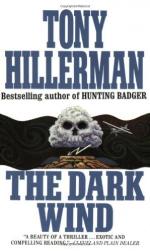 Tony Hillerman
This set of Lesson Plans consists of approximately 147 pages of tests, essay questions, lessons, and other teaching materials.

This quiz consists of 5 multiple choice and 5 short answer questions through Sections 11 - 13.

2. As the Cessna's pilot is bringing the plane in for landing, what does the pilot suddenly realize?
(a) Trust is a mistake.
(b) His landing gear is stuck.
(c) Drug running is dangerous.
(d) Law enforcment is just over the mesa.

3. According to what Johnson tells Chee, how many days will it be before the people who own the drugs figure out that Chee had them?
(a) Two days.
(b) Ten hours.
(c) Two weeks.
(d) Ten days.

4. According to the local gossip, who killed the John Doe that Chee was investigating?
(a) An evil spirit.
(b) A sorcerer.
(c) A witch.
(d) A ghost.

5. While Chee is waiting to talk to the owner of the Burnt Water Trading post, what are the three women in front of the store talking about?
(a) Witchcraft.
(b) Vandalism.
(c) Navajo traditions.
(d) Hopi folklore.

1. What is Jerry Jansen's occupation?

2. What is the name of Chee's uncle who taught Chee how to track?

3. Where is the Cessna scheduled to land on the night that it ends up crashing?

4. According to Johnson, how many sets of tracks are visible at the plane crash site?

5. How many grandchildren does Lomatewa have?