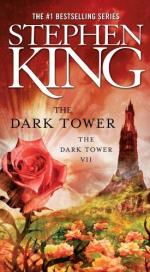 Stephen King
This set of Lesson Plans consists of approximately 120 pages of tests, essay questions, lessons, and other teaching materials.

1. What does John give back to Roland and to Eddie as they begin to part ways to go on their separate missions?
(a) Water.
(b) Computers.
(c) Packs.
(d) Books.

2. What do the travelers believe some of the buildings are made out of, which will make them prone to fires?
(a) Wood.
(b) Metal.
(c) Bamboo.
(d) Rock.

3. Who decides to kill the creature that looks like it has melted from moving from world to world?
(a) Roland.
(b) Jake.
(c) Joe.
(d) Eddie.

4. What does Mordred turn into when he begins to feed from Mia after he is born, according to this story?
(a) Part spider.
(b) Un-dead.
(c) Do-gooder.
(d) Vampire.

5. Finli tells Pimli that a rogue _________ robot is the thing responsible for the alarm bells going off at the door where the travelers are.
(a) Cleaning.
(b) Maintenance.
(c) Truth.
(d) Warrior.

1. Which of the characters is having a fit at the start of this section, which the other characters help him through?

2. What happens as Pimli and his servants are arguing? A _________ starts in the building, according to the story.

3. What is the name of the home of the Breakers, according to the story written in this section?

4. The rose represents the _____________ in this world, according to the explanation in the story, which Roland and the others realize.

5. What was the child of Roderick, Haylis, carrying when the two people stop him, though they do not hold him for long?

1. What does Finli notice, which is not helping his jitteriness in this section of the story when he's with Pimli?

2. What does Roland tell Sheemie they will need from him in the future, if they are successful in their plans?

3. Why do the Crimson's King's men try to kidnap Ted and take him into the world where he is now?

4. What is the dream that Sheemie has, which he shares with the others during this section of the story?

5. Why is Mordred angry with himself when he is just hours old and watching the characters talk about him?

6. How does Callahan order the vampires to get away from him, in this first section of the story?

7. Why are Father Don and Jake Chambers at the restaurant at the start of the story?

8. What does Susannah decide to do in order to escape from the place where Mordred and the others are keeping her?

9. What do the travelers find the in the cave when they manage to make it to the cave together?

10. Who are the fathers of the baby, according to Susannah's recollection of the way that Mordred was conceived?