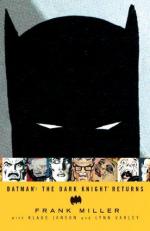 1. In what ways is the protagonist, Bruce Wayne, conflicted at the beginning of "The Dark Knight Returns"?

At the beginning of "The Dark Knight Returns," Bruce Wayne is very nearly killed in a race car accident. It seems he is attempting to get the same adrenaline and action he once did as Batman. Even when talking with Commissioner Gordon, Bruce Wayne makes the comment that Batman didn't survive the retirement. As he walks home, he thinks about how he can feel Batman stirring inside of him.

2. In what ways are the soaring high temperatures symbolic of the violence in Gotham City?

The temperatures are escalating much like the violence is escalating in Gotham City. As heat increases, so do the number of people harmed by the Mutants and other criminals.

3. How does the attempted mugging of Bruce Wayne trigger a flashback to a former violent act?