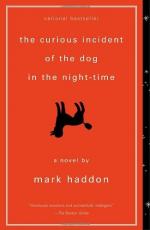 This quiz consists of 5 multiple choice and 5 short answer questions through Chapter 137 | Chapter 139.

3. What example does the narrator give of his father breaking the rules?
(a) His father drives over the speed limit.
(b) His father cheats on his taxes.
(c) His father sometimes drinks and drives.
(d) His father steals lawn ornaments out of the neighbors' lawns.

1. What was on the front cover the card the narrator sent to his mother while she was in the hospital?

2. What is one of the reasons the narrator gives for finding people confusing?

3. What type of listing does the narrator include in Chapter 73?

4. What profession does the narrator tell his readers he would be good at?

5. What does Father make the narrator promise to give up at the end of Chapter 79?