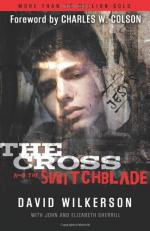 The Cross and the Switchblade Quiz | Eight Week Quiz C

David Wilkerson
This set of Lesson Plans consists of approximately 136 pages of tests, essay questions, lessons, and other teaching materials.

This quiz consists of 5 multiple choice and 5 short answer questions through Chapters 7, 8, 9 and 10.

2. What does Dave's wife remind him when he tells her of the rally?
(a) That she told him it would be fine.
(b) That she has accomplished something too.
(c) That he was supposed to be home.
(d) That he was sure it was going to be a failure.

3. What did Dave do after the first day at the courthouse?
(a) Talked to a priest.
(b) Returned home.
(c) Looked up his ex-friend in New York.
(d) Got a motel room.

5. How did some people in his hometown react when Dave returned home?
(a) Enthusiastic.
(b) Cold and rejecting.
(c) Indifferent.
(d) Disparaging.

1. How did Dave feel as he drove to New York?

3. Who was healed through prayer?

4. What did Dave manipulate Nicky into doing the last night of the rally?

5. What could the violence that spreads out from gangs called?

More summaries and resources for teaching or studying The Cross and the Switchblade.

The Cross and the Switchblade from BookRags. (c)2020 BookRags, Inc. All rights reserved.