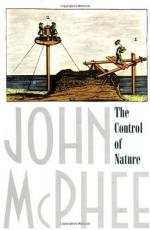 The Control of Nature Chapter Abstracts for Teachers

John McPhee
This set of Lesson Plans consists of approximately 140 pages of tests, essay questions, lessons, and other teaching materials.

• This book is written as a nonfiction historical novel, featuring three geological regions that are potentially dangerous to the communities that are established there.

• The author writes about the lives of residents, politicians, scientists, and other people in these regions, showing how they're in conflict with various forces of nature.

• McPhee reveals how people's actions and decisions contribute to major conflicts with nature.
• The geological region covered in the first section of the book is Louisiana by the Mississippi and Atchafalaya rivers.

• In the French Acadia region of Louisiana, a navigation lock connects the Mississippi to the Atchafalaya.

• The Atchafalaya River is at a significantly lower elevation than the Mississippi River.

• The author speaks with Norris F. Rabalais, a Cajun born and raised in Avoyelles Parish, Louisiana, who works as a construction inspector for the U.S. Army Corps of Engineers.

The Control of Nature from BookRags. (c)2020 BookRags, Inc. All rights reserved.