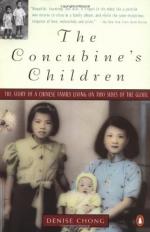 The Concubine's Children: Portrait of a Family Divided Chapter Abstracts for Teachers

Denise Chong
This set of Lesson Plans consists of approximately 121 pages of tests, essay questions, lessons, and other teaching materials.

• Denise and her mother, Hing arrived at her aunt's house. Her uncle, Yuen was there as well.

• The house was nice, but run down. It had been elaborate in the past. Ping gave Hing a coat as a gift. It was old and obviously important.

• The story changed to May Ying's past. She was 17 when she was sold as a concubine to Sam in Canada. She traveled alone there.
• Sam worked in Canada to send money to his wife in China. He got lonely, and sent for a concubine. The owner of the tea shop paid for her passage.

• She had to work in the tea shop for 2 years to pay for the passage. She did well at the job.

• Sam got jealous of her popularity and tried to get her to quit her job.
• May Ying got pregnant with Ping. She was named after Sam's...

The Concubine's Children: Portrait of a Family Divided from BookRags. (c)2020 BookRags, Inc. All rights reserved.