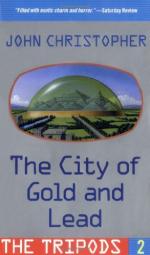 The City of Gold and Lead Fun Activities

Samuel Youd
This set of Lesson Plans consists of approximately 133 pages of tests, essay questions, lessons, and other teaching materials.

Build a model of a Tripod City with clay or some other medium.

Have each student select a character from slips of paper in a bag and act as that character. Suggested characters: Will, Fritz, Henry, Julius, Beanpole, Ulf, Fritz's master, Hans, and Moritz.

Write a poem about Fritz being a hero.

With match sticks, Popsicle sticks, q-tips, etc. build a model of THE CITY OF GOLD AND LEAD.

Create three posters about THE CITY OF GOLD AND LEAD using a variety of media (chalk, paint, markers, watercolors, etc..). These posters might...

More summaries and resources for teaching or studying The City of Gold and Lead.

The City of Gold and Lead from BookRags. (c)2021 BookRags, Inc. All rights reserved.