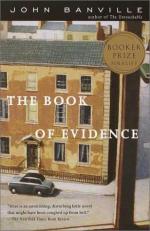 The Book of Evidence Character Descriptions

John Banville
This set of Lesson Plans consists of approximately 131 pages of tests, essay questions, lessons, and other teaching materials.

This conniving and manipulative liar is married and has a child but has also had a series of inconspicuous relationships and is now on trial.

This character is an art dealer who once had a close, yet questionable relationship with another character.

This character is in the wrong place at the wrong time and is kidnapped and murdered.

This character, described as beautiful, is married and has a son but is not very attentive to the child involved.

A good friend and secret beneficiary of an estate, this character is mysterious, yet very warm-hearted.

Wealthy because of a namesake, this character has dabbled in art and traveled to America...

The Book of Evidence from BookRags. (c)2022 BookRags, Inc. All rights reserved.