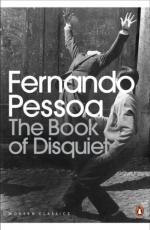 Fernando Pessoa
This set of Lesson Plans consists of approximately 129 pages of tests, essay questions, lessons, and other teaching materials.

1. In Section 305, the narrator explains that he feeds off of others' thoughts, emotions, and experiences. What does he refer to himself as based on this description?
(a) A parasite.
(b) A plagarist.
(c) An intellectual.
(d) A lifeless lump.

4. Why does the narrator's dreaming become painful?
(a) It is drug-induced.
(b) He is suffering from insomnia.
(c) He's sleeping on a bad mattress.
(d) The dreams seem so real to him.

5. What term does the narrator use to define a period of time in which he is unable to write as much as he is accustomed to writing?
(a) Writer's remorse.
(b) Writer's block.
(c) Stagnation.
(d) Tedium.

6. When does the narrator begin to think of writing as unappealing?
(a) When his mother tells him his writing is lousy.
(b) After he is told he is not physically appealing.
(c) After the critic finds fault with his work.
(d) After his book is rejected by a publisher.

7. What remained constant about the scales the girl played on her instrument when she lived above the narrator?
(a) She played at the same time every day.
(b) The pitch.
(c) She always got them wrong.
(d) The monotonous rhythm.

8. What is a semiheteronym?
(a) A persona that isn't too far away from the writer's personality.
(b) A term that refers to the writer who questions his/her own sexuality.
(c) The opposite of a semiantonym.
(d) The opposit of a pseudonym.

9. To what natural occurrence does the narrator liken his own feelings of tedium?
(a) Fog.
(b) Rain.
(c) Snow.
(d) Rainbow.

13. What does the narrator say he has inside him despite the appearance of being outwardly calm?
(a) Anger in his crushed soul.
(b) Joy in his soul.
(c) A crushed spirit.
(d) Heaven and hell.

15. The narrator says humans outwardly worship perfection. What does he say they do secretly?
(a) Conspire to achieve it.
(b) Nothing.
(c) Hate it.
(d) Covet it.

1. What objects of nature does the narrator discuss when he describes Spring?

2. What does the narrator call the act of writing when he begins to view it as unappealing?

3. Even though most people make him sick, why does the narrator still love fellow man?

5. When was the manuscript for this book discovered?

More summaries and resources for teaching or studying The Book of Disquiet.

The Book of Disquiet from BookRags. (c)2020 BookRags, Inc. All rights reserved.