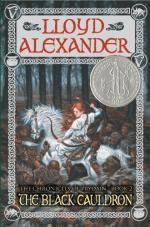 Chapters 1-2, The Council at Caer Dallben, and The Naming of the Tasks

• Taran is an Assistant Pig-Keeper for Dallben and is busy with his chores when several people arrive at the farm.

• Taran learns that there's to be a council and that he's included in the meeting.

• Gwydion announces plans to attack the dark kingdom of Arawn because Arawn has been building an army from corpses using a magic cauldron.

• Gwydion's plan calls for taking the cauldron, and Taran is to be part of the attack.

Chapters 3-4, Adaon, and In The Shadow of Dark Gate

• The trip to the Dark Gate is largely uneventful.

• Once they've arrived, Taran is one of three who are instructed to remain behind while the main group enters Arawn's kingdom to find the cauldron.

• Princess Eilonwy arrives with a creature named Gurgi, having followed Taran out of jealousy for having been...