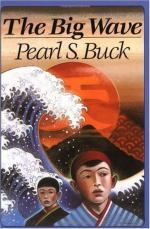 2. Why does Jiya never speak of his loneliness since the big wave?
(a) He can't bear the pain.
(b) He thinks people must be bored with it.
(c) He doesn't like to re-live the past.
(d) He doesn't want anyone to be sad.

5. Why does Jiya tell the Old Gentleman that his castle is not safe either?
(a) It is like living in a museum.
(b) It is filled with sneaky people.
(c) It will crumble if the earth shakes hard.
(d) It is too isolated for anyone to have friends.

2. What does the Old Gentleman demand of his offer to adopt Jiya?

5. What can Kino tell about Jiya when he sees him after Jiya learns about the Old Gentleman's offer?

1. Describe how Jiya feels happiness when he returns to be part of Kino's family.

2. How does Kino's father respond to Kino when he states that the Japanese people are unlucky to live in the middle of so much danger?

3. What explanation do the two men give when Kino asks what they will do if the big wave comes back?

4. What is Kino's father's position on why Japanese people don't fear death?

5. What is it about the geography of where he lives that makes Kino think he and his family are unfortunate?

6. Kino's father says that Jiya will be happy again only when he is able to do what?

7. Where will Jiya build his house and what does he need in order to get started?

8. How does Jiya feel initially when he sees the new house being built on the beach?

9. What is Jiya's rationale for why the Old Gentleman's castle is no safer than a house on the beach?