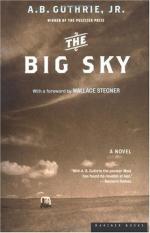 A. B. Guthrie, Jr.
This set of Lesson Plans consists of approximately 121 pages of tests, essay questions, lessons, and other teaching materials.

1. What is Boone's reputation when the story begins, and what trouble is he in as a result of his actions?

Boone is seventeen and well known for his temper and getting into fights as the story begins. He has been in a fight with Mose Napier and there is a warrant issued for his arrest.

2. What causes Boone to leave home in Chapter 1 and what items does he take with him?

His recent fight and trouble with the law are compounded when Pap starts hitting Boone, who protects himself. After knocking Pap out with a piece of wood, Boone decides that it is time to leave home, so he packs an Indian strop and takes his rifle along with a chicken that his mother was cooking.

3. How does Boone meet Jim Deakins?

Boone is walking when he meets Jim Deakins, who is riding in a wagon. At first, Boone tells Jim that his name is Zeb Calloway, but when the two know each other better, Boone reveals the truth about his identity.