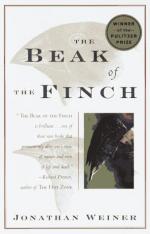 The Beak of the Finch Test | Mid-Book Test - Hard

Jonathan Weiner
This set of Lesson Plans consists of approximately 101 pages of tests, essay questions, lessons, and other teaching materials.

1. Who was Trevor Price's assistant in the Galapagos?

2. What does the Difficilis on the Pinta eat?

3. Which are the "fittest finches on the island," as discussed in Chapter 8?

4. As related at the end of Chapter 3, which person sustained an injury from the barnacles on Daphne Major?

5. How many populations of finches did the Grants study during their first year in the Galapagos?

2. How do various species get from island to island in the Galapagos? Remember to include examples of both plants and animals.

3. Summarize the arguments of some of the biologists' early opposition to the theory of evolution.

4. How do the Grants collect blood samples from the finches?

5. Discuss the likelihood that two species will hybridize and the probable outcomes of such a hybridization.

6. Describe some of the differences between the finch species in the Galapagos.

7. How did the finches respond to the rain after the intense drought?

8. Explain the occurrence of natural selection that Dolph Schluter found in the sparrows.

10. Describe the typical method of arrival on Daphne Major.

Describe Weiner's use of metaphor in explicating the information he presents, citing the finches' resemblance to Sisyphus as an example.

Explain Darwin's "eureka" and its implications for later scientific thought.

Describe Weiner's use of conceit (extended metaphor) and its significance in the book.

More summaries and resources for teaching or studying The Beak of the Finch.

The Beak of the Finch from BookRags. (c)2022 BookRags, Inc. All rights reserved.