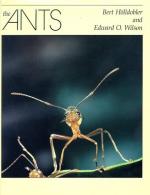 Get The Ants from Amazon.com
View the Study Pack
Lesson Plans
Order our The Ants Lesson Plans

Bert Hölldobler
This set of Lesson Plans consists of approximately 121 pages of tests, essay questions, lessons, and other teaching materials.

1. Which of the following is NOT a system of kin recognition listed in the novel?
(a) Spatial Distribution.
(b) Recognition by Association.
(c) Sensual Recognition.
(d) Allelic Recognition.

2. What are repletes concerned with?
(a) Defense.
(b) Reproduction.
(c) Brood care.
(d) Food storage.

4. Which of the following procedures is NOT altered when an individual undergoes sociogenesis?
(a) Caste.
(b) Sexual fertility.
(c) Physical location.
(d) Behavior.

5. What is the colloquial name for the ant species "Monomorium pharanaomis"?
(a) Queen's ants.
(b) Sphynx ants.
(c) Pharaoh's ants.
(d) Cleopatra's ants.

1. Which of the following worlds does Wilson claim that ants run?

2. Which of the following is NOT an insect phenomenon documented in the opening of this novel?

3. What happens in during pleometriosis?

4. Which of the following is NOT a factor distracting from optimal foraging within an ant colony?

1. What claim of colony odor did scientists Jaffe and Sanchez make in 1984?

2. What happens during the founding stage of an ant colony?

3. What study was performed on fire ants leading to the understanding the foragers will respond to the nutritional needs of their colony?

4. What are the most common ways through with an ant colony becomes polygynus?

5. What is a "super colonial" ant colony?

6. What controversy surrounds the ant fossil discovered in the Victoria, Australia by Jell and Duncan in 1986?

7. Why is communication between ants important during transportation?

9. Why are caste systems often used within ant colonies?

10. Why are extra queens often considered an unnecessary burden within a colony?

More summaries and resources for teaching or studying The Ants.

The Ants from BookRags. (c)2022 BookRags, Inc. All rights reserved.