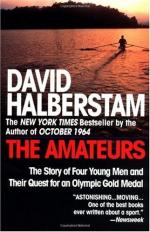 2. Who did Biglow think he might write to find out about a weight-lifting program?
(a) Lewis's cousin Mike.
(b) Tony Johnson.
(c) Frank Cunningham.
(d) Harry Parker.

3. Who did Biglow believe were his biggest competition for the bronze medal?
(a) Karppinen and Kolbe.
(b) Deloof and Pancic.
(c) Iosub and Clement.
(d) Ibarra and Mills.

5. When would there be an additional Olympic trial at Princeton for young men who had the right to challenge the camp boats?
(a) June.
(b) July.
(c) May.
(d) August.

1. When did Lewis hope to row at Henley in a single?

2. Where did Lewis and Enquist go to practice after telling Parker they wanted their own double?

3. Who was stroking the quad at the finals?

4. When did Tony Johnson win a silver medal?

5. What type of drinks were featured in a commercial that ABC aired during the sculling race?

1. How did Biglow and Most get an opportunity to row in a regatta in the East?

2. Why would the repechage at the Olympics be rowed all-out in a way usually reserved for a final?

3. Why did Enquist tell Lewis not to get arrested and put in jail?

4. Why was the row that Wood and Pat Walter rowed an odd row?

5. Why was Biglow's rowing proving to be a mystery to him and his coaches?

6. Why did Parker and Altekruse argue on the day of the Princeton trials?

7. Why was selecting boats more difficult for an Olympic team than for a college one?

8. Why was Wood's fall from rowing so terrible?

9. How did Cunningham's coaching career begin in Seattle?

10. What personal disappointment was Harry Parker fighting during team camp?