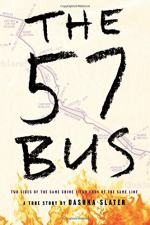 Dashka Slater
This set of Lesson Plans consists of approximately 116 pages of tests, essay questions, lessons, and other teaching materials.

1. What is the law in California that allowed prosecutors to file charges against juveniles in adult court?

2. Who does Sasha go to their senior dance with?

3. What was the name of the Burn Center Sasha's doctor had worked at for years?

4. Who is one of the men who saved Sasha on the bus?

5. Whose actions prompt a restorative justice circle at Oakland High in the fall of 2015?

1. What is some of the worst pain Sasha experiences as a result of the attack?

2. Why are Sasha's friends so shocked that such a horrific crime could happen to Sasha?

3. What does Richard tell his mother Jasmine about forgiving and forgetting?

4. What profile do most people who commit hate-crimes fit?

5. How do many of the people who know Richard best react to the news of his crime?

6. How does Slater feel about the way the police who questioned Richard treated him?

7. Why does Andrew avoid visiting Sasha in the hospital?

8. What do the police questioning Richard tell him about the evidence they have against him?

10. What are some of the most common emotions burn patients feel in the hospital, according to Slater?

What are some of the conflicting emotions Jasmine, Richard's mother, feels about Richard's crime and the way his court case proceeds? Write an essay explaining your answers.

Why do you think Sasha prefers for people to refer to them using the pronoun "they?" Write an essay explaining your answer.

What are some of Karl's and Debbie's most significant worries for Sasha's safety as Sasha grows up? Write an essay explaining your answers.

More summaries and resources for teaching or studying The 57 Bus.