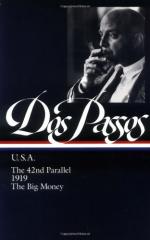 Objects & Places from The 42nd Parallel

This was the site of the birthplace of Fainy McCreary in Middleton, Connecticut.

This city is in Illinois where Fainy's family moved after his mother's death.

This is a Midwestern state where Fainy goes to sell books.

This is the country to the north of the United States, where Mac and Ike spend time working and traveling.

Mac is in this city in Northern California when the earthquake occurs.

This is Mac's location when he goes to work on a newspaper for the labor movement.

This is a city in Southern California where Maisie and Mac go after they are married.

This is a Mexican city across from El Paso where Mac goes after splitting with Maisie.

This area of the nation's capitol is the home of Janey Williams.