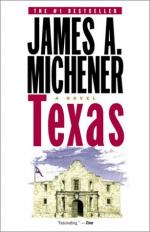 James A. Michener
This set of Lesson Plans consists of approximately 123 pages of tests, essay questions, lessons, and other teaching materials.

• Dr. Travis Barlow is summoned to the office of the governor of Texas, where he is introduced to a group of four people: Ransom Rusk, Lorenzo Quimper, Lorena Cobb, and Professor Efrain Garza.

• The governor wants a report in time for the Texas Sesquicentennial. It is to emphasize what makes Texas unique from other states and how to instill a love for Texas in the children.

• The group is to travel around the state and hold meetings in different areas.

• Barlow is appointed the chairman of the Task Force.

•
• Lorena says the report should emphasize the seven cultural inheritances that include Indian, Spanish-Mexican, Kentucky-Tennessee settlers, settlers from the Old South, the Blacks, Cowboys, German, and European settlers.

• Each of the members of the Task Force has a long family history in Texas.

Chapter I, Land of Many Lands