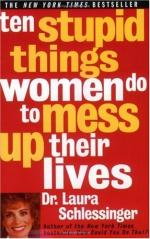 Laura Schlessinger
This set of Lesson Plans consists of approximately 99 pages of tests, essay questions, lessons, and other teaching materials.

3. Women sometimes become disappointed in their boyfriends because these men represent something in themselves that is __________.
(a) Desirable.
(b) Loving.
(c) Diappointing.
(d) Sexy.

More summaries and resources for teaching or studying Ten Stupid Things Women Do To Mess Up Their Lives.

Ten Stupid Things Women Do To Mess Up Their Lives from BookRags. (c)2022 BookRags, Inc. All rights reserved.