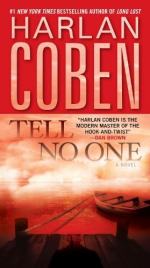 Tell No One Chapter Abstracts for Teachers

Harlan Coben
This set of Lesson Plans consists of approximately 165 pages of tests, essay questions, lessons, and other teaching materials.

• David Beck and his wife Elizabeth make the drive to Lake Charmaine, a secluded lake property that belongs to David's grandfather, for the anniversary of their first kiss.

• David and Elizabeth go to the tree where their initials are carved along with a slash carved for each of the twelve years that had passed since their first kiss that occurred when they were just twelve.

• After the ritual at the tree, David dives into the lake for a swim and hears Elizabeth screaming from the shore.

• Realizing his wife is being attacked, David rushes back to the dock, but is knocked unconscious.

• Eight years after Elizabeth's murder, David is a pediatrician in a poor part of town where he deals daily with teen pregnancy and other problems typical of poverty-stricken areas.

• Near the anniversary date of their first kiss and Elizabeth's murder, David receives...