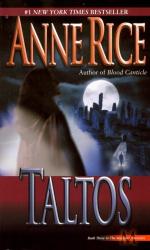 Anne Rice
This set of Lesson Plans consists of approximately 133 pages of tests, essay questions, lessons, and other teaching materials.

With paper mache or clay, make a model of a Taltos.

Divide the class into four groups: Witches, humans, Taltos and Little People and have the groups work out rules for them to live together in peace.

As a television reporter provide a detailed report with interviews of Morrigan's birth.

Have everyone bring in pictures cut from magazines that illustrate their idea of what Ash, Samuel, Yuri, Mona, Michael, Rowan, Mary Jane, Stuart, Tessa and Morrigan look like.

Create a trivial game based on Taltos. Have the categories involve items from the book, such as the Taltos, Little People, family dynamics, fitting in with the human race, and history of witches.

Play the trivia game in groups with the winner...