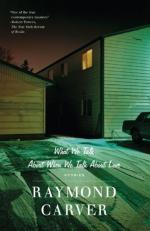 Raymond Carver
This set of Lesson Plans consists of approximately 115 pages of tests, essay questions, lessons, and other teaching materials.

1. How does the author characterize Laura and Terri's relationship?
(a) Somewhat distant.
(b) Focused on lots of shared interests.
(c) Very close and sisterly.
(d) Based on the fact that they work together.

4. What literary device does the author use in portraying Mel's difficulty in understanding love despite his profession?
(a) Symbolism.
(b) Anastrophe.
(c) Emulation.
(d) Irony.

5. How does Mel's behavior influence the other characters?
(a) It encourages them to talk more.
(b) They become afraid and anxious.
(c) They become overwhelmed.
(d) They feel safe and secure.

6. How does the tone change as the story progresses?
(a) It relaxes.
(b) It becomes humorous.
(c) There is no clear tone.
(d) It becomes more tense.

7. According to the author, what is the ultimate conclusion about the meaning of love?
(a) It can only be felt by the elderly.
(b) It does not exist.
(c) It remains elusive.
(d) It is fully understood by all characters.

8. What literary tool is used in the story of the old couple and Mel and Terri's relationship?
(a) Alliteration.
(b) Parallelism.
(c) Anthropomorphism.
(d) Imagery.

10. How does the author characterize Terri and Mel's relationship?
(a) Hostile and rocky.
(b) Strong and honest.
(c) Egalitarian and loving.
(d) Unstable and volatile.

11. Which of the following is the resolution to the story of the old couple?
(a) There is no resolution.
(b) They both end up dying.
(c) They recover and are discharged from the hospital.
(d) They realize that they are not meant to be together.

13. According to the author, what role do analysis and science play in the meaning of love?
(a) None.
(b) They contribute to only the physiological responses.
(c) They explain it fully.
(d) It is not clear.

14. Why is Mel's story interrupted in the middle?
(a) Laura wants to go to dinner.
(b) He wants another drink.
(c) Terri becomes irritated.
(d) Nick falls asleep.

1. As Carver's story progresses, how do Mel and Terri's attitudes toward each other change?

2. How many stages of love are there, according to the author?

3. Why might point of view play a role in how Mel's relationship is perceived by the reader?

4. Which of the following characters chastises another at one point in the story?

5. Which of the following terms refers to the literal definition of 'heart'?