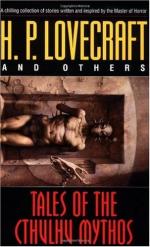 1. Who visits Carson at the house?

2. What famous author dies in The Terror From the Depths?

3. Which of the languages is not translated into English?

4. What is the name of the main character and narrator?

5. What is the surname of the professor?

1. Paul Lang learns about an ancient manuscript called the Voynich. What does Lang do when he cannot find a copy of the text?

2. Who is Albert Wilmarth? Why is he an important part of the story?

3. Who is Professor Upton Gardner? How does he become involved in the mystery at Rick's Lake?

4. In the story Cold Print, the main character is Strutt. Who is Strutt? What is his personality?

5. After Al and Cissie sail off aboard the yacht, they disappear from the scene. What has happened to Al and Cissie?

7. What were some of the things that could serve as proof of the threshold and what lay beyond?

8. Who is Dr. Ambrose Dexter? Why is he important in the story? What does Fiske find when he meets Dexter?

9. Who are Folin and Tony Alwyn? What is their relationship?

10. What happens when Strutt meets the proprietor of the book shop? What is Strutt's reaction?

Time travel is a popular notion in this genre. Time travel allows a character to experience another world, albeit with dangerous or deadly consequences. In "The Hounds of Tindalos," Chalmers claims that he has gone too far when it comes to time travel and that he has alerted the hounds of Tindalos which will ultimately make him pay for his misdeeds. Examine why time travel is a main topic in many horror stories. Explain how it is done in the stories and the characters' motivation for attempting to do it. Also examine the potential dangers in time travel and why the characters choose to ignore the warning signs.

Several of the stories mention ancient and/or forbidden texts, such as the infamous Necronomicon. Which other texts are mentioned? Which is the most referenced? Which is the most powerful? Does the text actually exist? If so, is the text available to the public? Why do the characters feel compelled to locate the texts? The characters often find the need to translate the texts. In which languages were the texts written? How can one be sure that the text is genuine? How can one be sure that the translation is correct? What might happen if a translation is incorrect? Also discuss the purpose and use of the texts in various stories.

More summaries and resources for teaching or studying Tales of the Cthulhu Mythos.

Tales of the Cthulhu Mythos from BookRags. (c)2020 BookRags, Inc. All rights reserved.