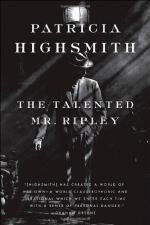 Patricia Highsmith
This set of Lesson Plans consists of approximately 97 pages of tests, essay questions, lessons, and other teaching materials.

2. Who does Tom identify himself as at the police station?
(a) Dickie
(b) Mr. Greenleaf
(c) Wallace
(d) Himself

5. Why is Tom worried about going to the Naples bank?
(a) Dickie was there many times
(b) He feels violent
(c) He does not have time
(d) The police are after him

1. Who does one of the Franchetti brothers jokingly suggest Dickie's traded his passport with?

2. What does Tom convince the detective Dickie was despondent about?

3. What does Tom tell Mr. Greenleaf he has found in Dickie's suitcase?

5. Who does Tom think of when he wakes up?

1. What does Marge think about the situation with Dickie?

2. How do the police think Freddie was murdered?

3. How does Tom try to hide that Freddie is dead when he takes him outside?

4. What does Tom read in the newspapers in Chapter 30?

5. Why does Tom love his possessions?

6. What information does McCarron want from Tom?

7. What does Tom tell Mr. Greenleaf about Dickie's murder?

8. What does Tom say to Mr. Greeenleaf in his letter in June?

9. What does Tom tell Marge on the phone?

10. What does Mr. Greenleaf write in his letter to Tom?